Reepham’s eye to the sky

For more than three decades, through the Second World War and the Cold War, Reepham people played their part in Britain’s civil defence system. Here we tell the story of the Royal Observer Corps in Reepham, and explain how the town came to have its own nuclear bunker.

Not much to look at today – but this little tower has a story to tell.

Travelling to Reepham from Norwich on the A1067, you may have noticed a little brick-and-concrete building at Sparhamhill, on the southern edge of the main road just before the turning to Nowhere Lane. Tucked into the hedge, it’s nothing much to look at. From its height you might guess it was built to hold water for irrigation, or diesel for farm vehicles.

In fact, this modest tower would once have allowed civil defence volunteers to track Soviet aircraft on their way to attack Britain’s airfields and cities. Close to the base of the tower is the entrance to an underground bunker from where the Royal Observer Corps (ROC) members would have phoned in reports of nuclear explosions. 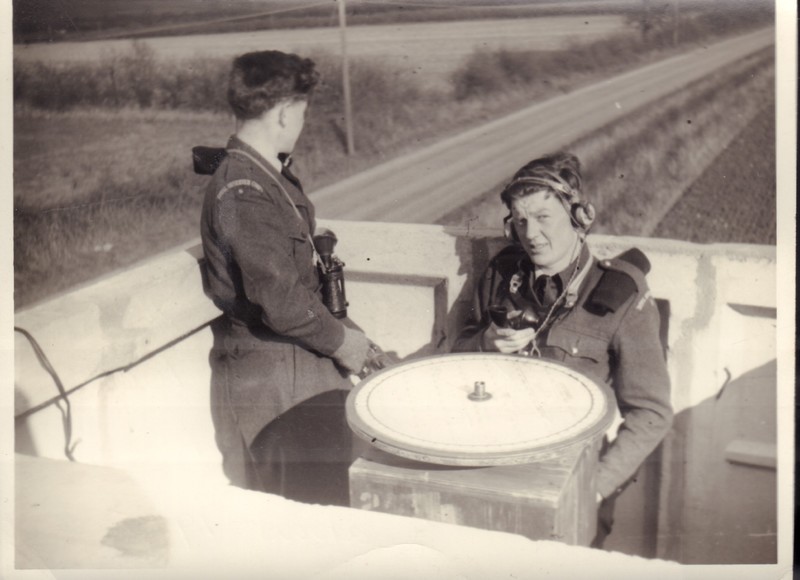 Vernon Whall (right) and colleague at Reepham ROC post, around 1958. The ROC observers would use binoculars and paper maps to plot the path of Soviet bombers. The underground bunker nearby was not built until 1962. (Photo: Evelyn Whall).

The ROC post at Sparhamhill operated from 1953 to 1968, at the height of the Cold War. But Reepham’s connection to the ROC goes back two decades before that, starting with the threat of war as Adolf Hitler’s Nazi party tightened its grip on Germany.

Standing up to Hitler…

The First World War of 1914–18 had shown Britain the danger of aerial attack, first by Zeppelin airships and later by aeroplanes. By the late 1920s the newly founded Observer Corps was expanding its operations across southern England to protect against the growing threat from bigger, faster aircraft.

In November 1934 Reepham gained its own Observer Corps post – but not at Sparhamhill. The original Reepham post was much closer to the town: on Norwich Road, on the high ground near the junction with Furze Lane. Officially titled “16 Group Post W1”, we believe it stood near grid reference TG 112 225, though we don’t know the exact location. As to the type of structure, it was probably a hut of wood or brick, with a telephone pole for communications.

When war broke out five years later, thousands of Observer Corps personnel played a vital role in Britain’s air defences, tracking German planes inland at a time when radar was only set up to spot raiders approaching over the sea. In recognition of their work during the Battle of Britain the organisation became the Royal Observer Corps in 1941.

1941 was also the first year that women were allowed to join, and Hazel Dove of Reepham was ready to do her bit for air defence. In 2020, as a sprightly centenarian, she spoke to Ann Middlemas of Reepham Archive about her memories of days and nights at the Reepham post.

As well as looking for German raiders, the observers had to count Allied aircraft as they flew out and returned home, Hazel said. She remembered the sky being black with planes flying in formation, sometimes 800 aircraft in the sky at once.

For the night shift from 1 am to 5 am there would be three girls on duty, and two at other times. They were issued with a rifle to defend themselves, though Hazel doubts she would have fared very well if she had had to fire it.

On clear mornings they could see the vapour trails of “doodlebugs” – V1 flying bombs – launched from France towards southern England. These too were targeted by anti-aircraft guns and RAF fighters thanks to ROC reporting.

American airmen would stop by the post to chat, Hazel said. For daytime raids the aircrew got up at 3 am to reach targets over Germany just after 8 am. Too many of them never returned.

Hazel appears in the team photo below, in the front row on the left. We believe it was taken in 1944.

The end of the war in 1945 brought little respite for the ROC as the Soviet Union soon became the next military threat. In the 1950s the Russians developed their own nuclear weapons to match those of the USA, and the UK soon followed.

The photo below from the Reepham Archive collection shows a group of male ROC volunteers from Reepham looking smart in their RAF-style battledress. The uniform badges mean the picture was taken between 1941 and 1950. The smaller size of the team compared to the photo above, and the fact that there are no women, suggests that the photo might be post-war. From the background, we guess that the photo was taken near Booton School, across the field and downhill from the observation post. 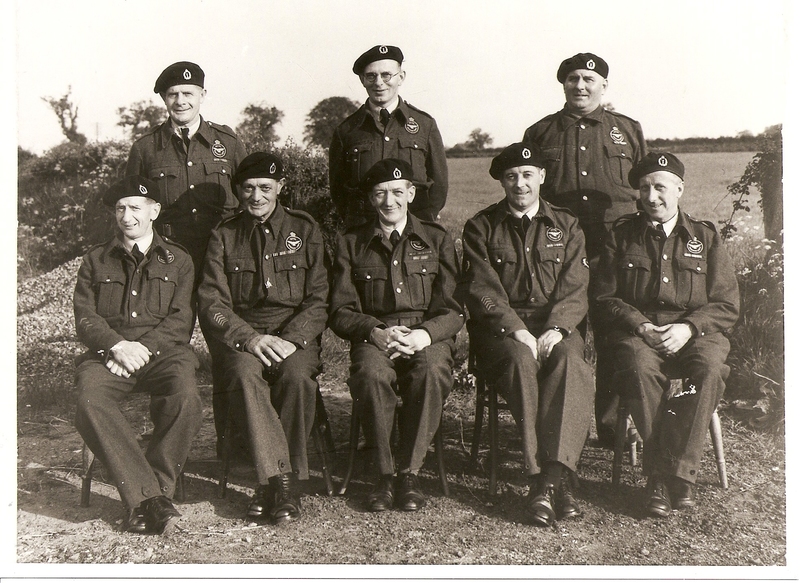 At this time many ROC posts were rebuilt with prefabricated concrete structures known as Orlits, after the company that made them. We believe Reepham had an Orlit from 1951 onwards.

In September 1953 Nikita Khrushchev became First Secretary of the Communist Party of the Soviet Union. The following month, Reepham’s ROC post moved to its present site next to the A1067 (the grid reference is TG 086 190) and was re-classified as “6 Group Post S3”. It kept the Reepham name, and the concrete Orlit platform you can see today at the top of the brick tower probably migrated from the Norwich Road site, along with its crew.

Vernon Whall served at the Reepham ROC post around this time and his widow Evelyn has a photo (top) of him and a colleague at the plotting table. Vern and Evelyn were married in 1958, when he was 21, and she thinks the photo dates from then or a little earlier.

The straight road and the platform’s height above the ground suggest the photo was taken at the new location on the A1067, as we would expect from the date. Evelyn’s parents lived on the corner of the A1067 and Nowhere Lane, and she remembers Vernon cycling the short distance from there to the ROC post.

By the mid-1950s jet aircraft were flying at speeds and heights that gave little chance of visual identification from ground level, and missiles carrying nuclear warheads were becoming a serious threat. Realising that a roofless hut was not an ideal place to be during a nuclear war, around 1957 the ROC started building underground shelters. From now on the organisation’s main role would be to find out where the nuclear bombs were falling. 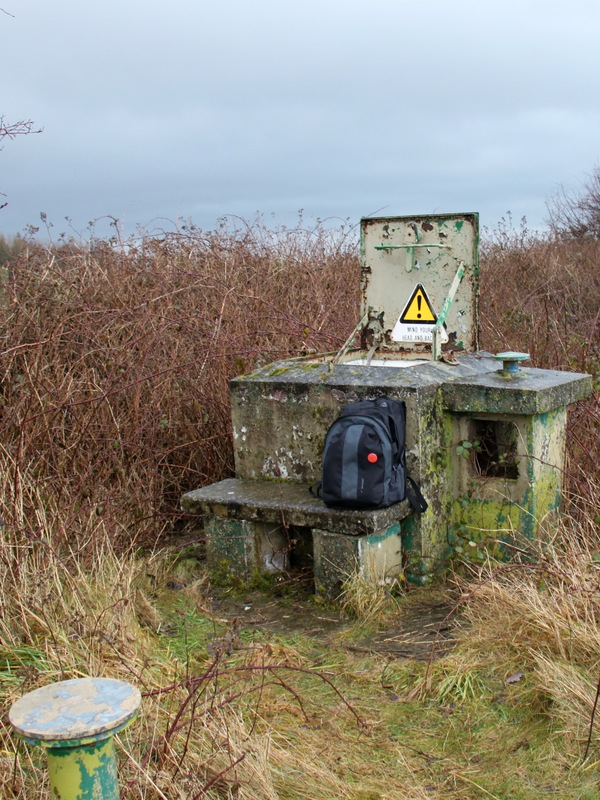 Down the hatch: The entrance to an ROC bunker at Peterchurch in Herefordshire, which is identical in design to the Reepham post. In the foreground is the measuring tube for an instrument named the Bomb Power Indicator. (Photo: James Woolley/Flickr).

In the event, Reepham did not get its underground post until September 1962. This was built to a standard design: a small concrete room buried a metre or two below the surface, just large enough for a couple of bunks, a chemical toilet, a telephone and a shelf of instruments. The three-person crew entered by ladder, descending a vertical concrete shaft and closing a steel hatch behind them.

The volunteers running the Reepham post in the 1960s must have been brave. In the event of war – and the Cuban missile crisis of October-November 1962 made that seem horribly likely – their job was to sit in the bunker and wait for nuclear strikes while their families took their chances on the surface. Simple instruments would record the direction of each nuclear flash and the strength of the following blast wave, which the crew would phone through to headquarters.

Assuming anyone at the other end was left alive to take down the details, triangulation between several ROC posts would tell military commanders the location, height and size of each explosion. From that information they could work out likely casualty numbers and the path of the radioactive fallout.

In October 1968 the Reepham ROC post closed, along with many others, as a result of that year’s budget cuts. With the end of the Cold War, the ROC system shut down almost entirely in 1991.

Reepham is far from unique in having its own nuclear bunker. This map shows 55 ROC posts in Norfolk alone, along with many larger command posts and radar stations. Across the UK there were around 1500 ROC posts, spaced roughly eight miles apart. Some were filled in after decommissioning, but traces of many bunkers and their Orlit platforms are still visible, including those at Aylsham (closed in 1991), Guist and Saxthorpe.

Cramped and damp as ROC underground posts were, they still have their enthusiasts. One or two have been restored and are open to visitors, and in March 2022 the Eastern Daily Press reported that one near Brundall was attracting offers at an asking price of £25,000. The EDP photos show the access ladder and the inside of the bunker.

We specially thank Hazel Dove and Evelyn Whall for their personal memories, Edwina Holden and her colleagues at the ROC Association and at Winchester Museum for information on the history of the Reepham post, and Ann Middlemas for her local research.

Reepham Archive would welcome any more information on the original site of the Norwich Road ROC post and the local volunteers who kept the system going from 1934 to 1968.

Reepham’s eye to the sky